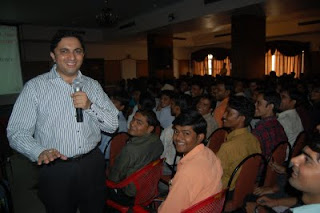 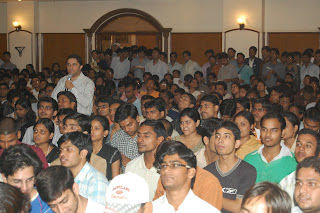 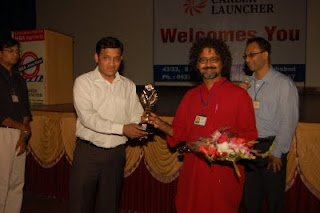 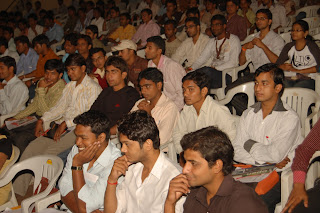 October & November proved to be the biggest months for CLA because two events were organised on a scale and magnitude, the likes of which Allahabad had not been witness to in recent memory. The first was Vocab-ki-Dhan-te-nan where a cyclone by the name of Akash Gautam hit Hotel Kanhashyam on 29 October. Agreed it was hyped, agreed that there was paucity of space, agreed that all the students could not be accommodated, but agreed too was the fact that it was well worth the effort put in by everyone at CL. Akash came, he saw and he conquered. The jam-packed convention hall (more than 1500 students) was bursting at its seams with expectation, and Akash certainly did not disappoint. With an energy that was breathtaking in its intensity, he swept everyone off their feet. With his now patented style of combining vocabulary with snippets from Bollywood & Hollywood blockbusters and well known advertisements, he managed to convert the dreary and dreaded subject of vocabulary into an exercise of amazing fun and learning. To top it up, he used his cutting sense of humour to devastating effect and brought the house down. The fact that it was not just entertainment (unadulterated-which it was) was borne out long after the event, when the English faculty at CLA found, to their pleasant surprise, that the students retained many of the words they had learned that day. Even at the end of 4 ½ hours, the students wanted more! To sum it up, Vocab-ki-Dhan-te-nan was an undisputed HIT!

The second major event happened on the 13th & 14th of November when 31 B-Schools landed in the Sangam city in a unique Sangam of their own, aptly named MBA Junction. Initiated by Career Launcher H.O. this was an event which was basically meant for those who might miss the IIMs or other top B-Schools but still have the fire for an MBA degree/diploma from a reasonably good B-School. The biggest take-away was the presence of so many stars from the IIM galaxy. The likes of Dr. Ramu Ayer, Mr. Abhilash Lal, Dr. Sudhir Sharan, Dr. Debrata Deb, R Sreenivasan to name just a few graced the stage and enlightened the students (who had braved the unseasonal rains) with their pearls of wisdom. More than 70 delegates from the different B-Schools gave their presentations on the two days. When quizzed about their Allahabad experience they were unequivocal and fulsome in their praise for the organisation and hospitality shown by Team CL Allahabad, which made their Allahabad sojourn most satisfying. The credit for organising and holding these two mega events within one month of each other goes to the entire CL team. Nonetheless, special kudos to Sanjeev, Zishan, Anushree, Shashank, Abhay, Vishal, Sohini, Alok, Ajoy and last but not the least, the livewire CEO of Panacea Mr. Gaurav Agarwal.

The Big CAT is on the prowl from 28th November onwards and the students are understandably jittery. Despite assurances from their mentors in person and on various alternative media like FB & Orkut, the butterflies in the collective stomachs refuse to lie still. IIFT on 22nd has already sprung a surprise by introducing sectional cut-offs. CAT was never predictable and this time it would be online, so double the jitters. Hopefully the students of CLA, fed on a regular diet of online MOCKS and counselled by committed mentors would be in a better frame mind to bell this CAT!

CAT fever on at CL, Allahabad...

As the countdown begins, the furrows on the brows are getting deeper, the cheeks are getting hollower (a self-invented word!), and the demeanour is getting less confident. All the puffery that was so evident in the earlier months is remarkable in its absence now. Some students of course would like to demur, but the fact of the matter is that as CAT draws closer, as the preparations get into the last lap, the heartbeats are getting louder by the minute. There are frequent reports of students breaking into cold sweat at all kinds of unearthly hours. Some students are intent on leaving no bases uncovered, but do we see a question of overkill here? On the other hand there are some who wear the bindaas/I give a damn/my-Dad-is-permanently-going-to-bankroll me attitude as a matter of style.

Some of them have made CL their second home and follow their mentors like faithful puppies, while there are others who grace CL by their August presence only when they feel like it.

CAT is almost like playing a game of Russian roulette. You never know what to expect till you have come out of the exam hall, and usually by then, it’s too late.

Guys, take a chill pill. Relax. Prepare the basics & prepare them well. Strategise, manage time, practice making the correct choices; remember you do not have to attempt each question. The IIMs actually keep throwing red herrings at calculated intervals. You’ll swallow only at your own peril. To quote a typical cricket analogy, play like a test batsman, surviving the opening spell is more about knowing what to leave and what to play...

All the best kids, keep the ol’ chin up and keep smiling. 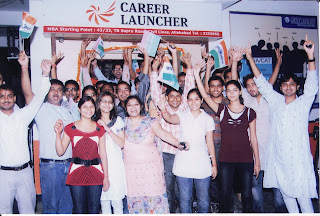 Independence Day eve was celebrated at CL, Allahabad on 14th August 2009 with enthusiasm, exuberance and élan. It also being the 14th anniversary of Career Launcher gave it one more reason to celebrate.

The entire campus bore a festive look with festoons, buntings and the National flag displayed prominently everywhere. Students mingled freely with their faculty, amidst a lot of patriotic spirit and fervour. The theme was overwhelmingly “Jaya He”. The artfully decorated front office bore testimony to the zeal of our young and imaginative creative team led by Sohini Ma’am & Ayushi Ma’am under the able guidance of Sanjeev sir, the Head of Locations. Even in this kind of ‘fired up’ atmosphere, students still found time to listen to the sagacious advice of Abhishek sir. Rohit sir in the meantime kept everyone in splits with his own patented brand of wacky humour and one-liners. Shashank sir, while living it up thoroughly, was quick to advise Ajoy sir to act his age! Zishan sir was seen trying to entice even gawking bystanders to join for some course or the other (ah the pressure of sales!), while Mohit after admiring himself for the umpteenth time in his lappy’s camera, decided to finally let his hair down and get down to the serious business of enjoying himself! Alok was last seen buried under an avalanche of exercise sheets and ‘Welcome packets’.

The entire event was the brain-child of Gaurav sir, the ebullient Director, whose express wish in organising it was to drive home the point that Independence Day was a day of introspection, of realising the real value of freedom, since most of us were not around when it took place. He stressed that despite the fact that CL Allahabad was setting new benchmarks for IIM selections every year, despite the fact that academic ERPs were being implemented successfully, despite CL Allahabad being the only training centre that was providing online mock CATs each month and finally despite the fact that CL Allahabad had won the academic excellence award for the third consecutive year it would be foolhardy to rest on ones oars. He exhorted the students to focus on their goals not only for the competitives, but on life in general. It was easy to see that such events help both, the trainers and the trained, to achieve the desired results. In the end the celebrations ended with distributions of sweets and a pledge to uphold the unity and integrity of our nation at all costs.

Posted by Unknown at 3:10 AM No comments: